So...last week there was a MAC Cosmetics job fair at the MAC store on Lincoln Road in Miami Beach. I had received an email about it and it seemed like it was heaven-sent. I have been really diving into the makeup scene and I live in Miami Beach just a few blocks from this store. It would be perfect as a freelance position.

I showed up and signed in and waited to be called. A Regional Recruiter came out and...well, it wasn't a great experience. I generally don't have a hard time relating to people but she was just not warming up. Her facial expressions showed she was less than impressed with my story and dreams and I kept feeling like the interview was more like a test. At the end, she invited me to go back the following day for the makeup test. I told her I couldn't go during the day because I work full time. She assured me we would find a time that worked best for me. She went to find the invitation sheet and showed me all the different times I can do the makeup test up to 4:00PM. I told her I can't make it to those times since I'll be at work.

Though I had already made her aware of the fact that I had rearranged my schedule in order to be there that day, she showed no interest in meeting me halfway in order to help me make things possible without jeopardizing my current job. At that moment, I realized that this is the sort of thing I need to not ignore. No matter how disappointed I felt that this wasn't the perfect job (as I thought it would be), I need to consider things like this a red flag. Otherwise, later down the line, I'll find myself in a job that I'm very unhappy in because of the way they treat employees and I'll be saying "They even showed me signs at the interview." At that point, I just said I couldn't make it the following day and walked back to my car (where I found an $18 parking ticket - yay!)

To my surprise, I received a phone call this past Sunday from the same Regional Recruiter inviting me back to do another job fair interview today (Wednesday) - but this time it would take place in Hollywood. I emailed the recruiter yesterday to make sure it wasn't pointless to go today if I knew I would again, not be available to do the makeup test the following day. She assured me it wasn't pointless and that I just need to take samples of my work. The ones I showed her last time will do.

Today, I got dressed, did my makeup and started the 1 hour drive through traffic to Hollywood. I paid $8 for parking and walked in. When I saw her, she first told the employee I was walking in with that I had already gone to the job fair last week and I had done the talk interview already - no need for me to do it again.

Then she asked me "Can you do the makeup test tomorrow?"
I told her I couldn't.
"At all?" she asked.
"No. Like not even if it was after-work hours," I told her.
She says, "Oh, that was the whole point of today - to schedule your makeup test."

SERIOUSLY!? You couldn't have, oh I don't know, done that OVER THE PHONE?!

She says, "Well then I guess we'll just be in touch to arrange something for another time."

I was too stunned to say anything at the moment but I wish I could go back.
All I was able to say was, "It WAS you that I was emailing back and forth with yesterday, right?"
She opened her eyes wide and nodded her head.

I was also concerned about really throwing out any possibility of being hired after all the trouble, and time I had already spent. I decided as I walked out that I really DON'T care about throwing out that possibility because I don't want this job. This lady has been playing games and making me waste my time.

How are you going to make me get ready, drive from South Beach to Hollywood during rush hour traffic and pay for parking so we can just "schedule a good time for me to do the makeup test"? Either you are totally inconsiderate and unfair or you have absolutely no common sense. Not sure which of the two I'd rather be.

Thanks so much for wasting my time, my money and my hope on this joke of a job fair you're having just for fun.

10 Steps to a Better Butt - Reblogged from Weight Watchers

10 Steps to a Better Butt

Boost your bottom line with these easy-to-follow exercises.

Try to perform a minimum of five of the below exercises at least three times per week — and always stretch out the muscles you have worked afterwards.

The reverse lunge
Stand a stride's length in front of a chair, feet and knees hip width apart. Place your left foot on top of the chair so you are standing on the right leg. Keep abdominal muscles pulled in tight as you slowly lower your hips down towards the floor. Hands on hips or out for balance. At lowest position your right knee should be over your right ankle, in line with second toe. Use your bottom muscles to push back up to start position. Repeat 12 times on each leg.

The chair squat
Stand in front of the chair, feet hip-width apart. Keep tummy tight as you lower yourself as if to sit on the chair. Just before you touch the chair, and with your knees over your ankles in line with the second toe, use bottom and thighs to push yourself back to standing. Build up to 20 repetitions.

Donkey kicks
Kneel on elbows and knees, elbows under shoulders and hands clasped together, knees hip width apart. Keep tummy tight and spine straight. Raise one foot towards ceiling and, with knee bent at a right angle, squeeze bottom and press foot up to ceiling 12 times. Repeat on other leg.

Bridge
Lie on your back with your knees bent and hip width apart, feet flat on the floor. Squeeze your bottom to lift your hips towards the ceiling until your body forms a straight line from knee to hip to shoulder. Repeat 10 times.

Advanced bridge
Follow above steps to bridge position, then keeping hips level and body in a straight line, lift and straighten one leg and lower 10 times. Keep squeezing your bottom to hold your hips in line. Return to start position before repeating on the other side.

Swimming
Lie face down on the floor, hands making a pillow for the head, legs shoulder width apart. Point your toes outwards, and roll your thighs inwards to connect the muscles of the bottom. Lengthen and lift the legs until they are just hovering off the floor. Keeping knees straight, kick the legs slowly as if swimming, alternating legs. Perform at least 20 kicks.

Wall squat
Stand in front of a wall facing away from the wall, feet hip width apart. Lean your back onto the wall, and slowly lower your body down towards the floor, shuffling your feet forwards until you are in a sitting position, ensuring the knees are above the ankle and in line with the second toe. Keep the tummy pulled in and a straight spine. Slowly push yourself back up to standing and slowly lower down again up to 5 times.

Body lift on chair
Lie on your back with your heels up on a chair, hands behind your head. Knees should be bent to a right angle. Squeeze bottom to lift hips up slowly until your body is in a straight line from knee to hip to chest. Lower the hips slightly and lift again squeezing your bottom and performing 15 to 20 thrusts.

Standing leg circles
Stand facing a wall hands on the wall and tummy pulled in. Lift one leg behind you keeping hips facing forward, and circle leg around 8 times in each direction. Repeat on other leg.

Walking lunge
Stand with feet hip width apart, hands on hips. Take a large step forward as you lower your body down until your front knee is above the ankle, in line with the second toe. Pause for 1 second and raise yourself up as you step forward onto the other leg, repeating the lunge. Perform up to 10 slow lunges on each leg.

This prom cutie knew exactly what look she was going for. I present to you... 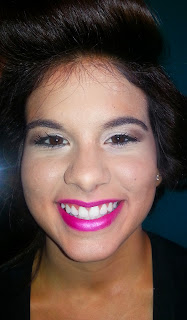 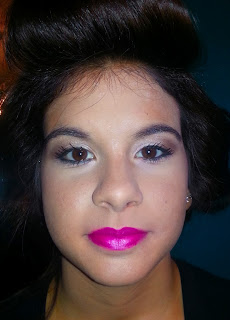 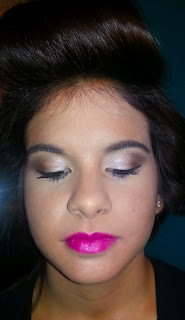 And...Congrats on being named Prom Queen!
:)

This is not really considered "news" anymore but I realize not everyone is reading up on the latest makeup news.

It's a challenge for most of us to find the right foundation shade for our skin. The solution has arrived (at least if you're buying your foundation at Sephora).

Various Sephora locations (none in FL at the time of this blog post) now have the Sephora + Pantone Color IQ.

How it works:
A Sephora salesperson will hold a spectrocolorimeter (a camera originally developed by Pantone for interior decorators) to your face. The spectrocolorimeter takes 27 pictures of your skin in seconds and comes up with a number based on your skin's color, undertones and warmth/coolness. Based on that number, the Sephora + Pantone Color IQ app picks the best-matching shades from those sold at Sephora.

Visit this link for an updated list of Sephora locations that offer the Sephora + Pantone Color IQ.

Wish they had something like this available for everyone!

Have you ever tried this Color IQ gadget? How did it work?
Posted by admin at 11:06 PM No comments:

admin
LOVE animals. Owner of my 3rd Miniature Pinscher and 1st chihuahua. Youngest of 4 children. Extremely close to my family. Copywriter. Make-up artist. Like to paint. Used to play the Piano. Used to want to be a dancer. Suffered from anxiety. Studied abroad in Florence, Italy for a summer semester. A few years later, I did another one in Berlin, Germany. My #1 dream town is Barcelona. My #2 is Amsterdam. Traveled much of western Europe. Struggle with spirituality. Drive fast. Entrepreneur. Owner of a business and trying to get it up and running. If I won the lotto, I would open an animal shelter with ample room for animals. Good food, healthcare and grooming would be provided for animals to increase adoptions. Victim of an afro-mania as a child (My mom used to comb out my curls). I like to sing…alone…in front of no one. Would love to flip a house. Obsessed with to-do lists…(this “about me” originated from one). Nice to meet you.